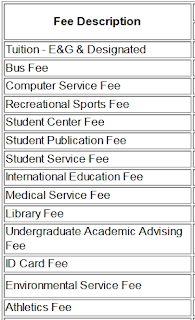 "AUSTIN - The University of Texas ranks among the best and most efficient public universities when it comes to graduating students in six years, but still must help them get their degrees faster, according to a school report released Thursday.


Texas graduates 81 percent of its students within a six-year window, 12th best out of the nation's 120 public research universities, according to the report. In Texas, that ranks second only to private school Rice University. Rice's graduation rate was not included in the report."

So, if my round trip airfare from Austin, Tx to San Jose, Ca is $238 on Continental, United or American... which airline has the lowest cost for the trip?

It depends on the number of pieces of luggage -- i.e. the FEES that they charge in addition to the airfare.


Texas State is Not UT

The fee table above is from Texas State University. At 12 units, these fees represent a 29% premium over the tuition. Oops, the parking permit required to park on campus is not included - and neither are books, or housing, or food... or beer!

Universities and airlines are "unbundling" prices in order to present the "lowest" tuition price (as determined by their marketing department). You might also say that they are trying to "hide" their total cost.

Until you understand what the total COST is, comparisons between airlines and Universities will continue to be difficult to judge.