Two weeks of experimentation using IFTTT to build Twitter lists has been very enlightening. Instructions to build the list and preliminary observations are located here:

I'm not going to repeat the details from those posts, but will try to offer the process that led me to collecting, cleaning and acting up on the new lists.

The instructions for starting the automated lists are covered in the articles above. After a week, the EDTECH1 list was nearly 3800 members an the MOOC2 list is approaching 590.

Twitter has a 5000 member limit, which is actually a useful feature as we will discuss below.

After the IFTTT recipe has run for several hours and the Twitter list populates, it becomes very clear that some Tweeps don't belong on the list. A simple rule set can speed the clean-up task.

Twitter has plenty of accounts that churn out spam, or the avian variation of spam. They are easy to spot on a list - more than 3-4 consecutive tweets, time to review their profile. My opinion: there is no need to include the noise. Click the gear next to their profile and remove them from the list - immediately.

Eggs are also an easy decision. If a user hasn't taken the time to choose an avatar, what are the chances they are contributing good content? I read a profile that said... "26 year old programmer..." Must not be a good programmer if they cannot figure out how to upload a picture. Remove.

Evil Twins are those those accounts that simply re-tweet everything that another account has posted. Sometimes it is an obvious variation "XYS-Sales" vs "XYX-Marketing", and they may even use a similar color-coded avatar. Other times they have a "male" account and a "female" account, or some other profile-targeted avatar. Take your time to review the primary account, but there is no need for the Evil Twins.

I left a more difficult decision point off of the chart - Tweeps that post in a foreign language. If the goal is to build a list to collect a community, then language should not exclude content. Maybe I'll create a "French MOOC" list since it seems that MOOCs are really popular with French speakers.

The clean-up process, for these three problem account types, reduced my list by almost 10%. But, it still does not represent the "best-of-the-best-of-the-best" (borrowing from Will Smith in "Men in Black"). The Twitte stream is clear, real people (ok, mostly-real people) are providing content. Are you ready for the next step? 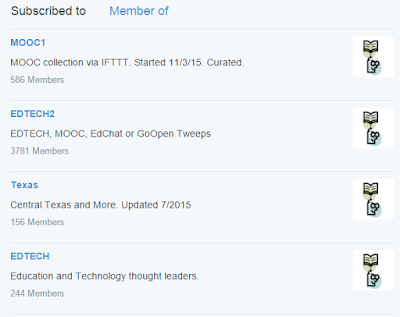 The original "EDTECH" list was built by hand. Fully curated, strictly filtered, including only those that Tweet on the topic on a regular basis. It is more valuable that the auto-generated list. The EDTECH2 list does provide two key advantages: low effort and high speed. Here is how to leverage both:

If your list does get to 5000, consider culling 50-100 names and letting the list rebuild. This will help identify new voices on your topic.

The initial collection process is a bit rough, but having a specific goal (keywords and hashtags), experimenting with the IFTTT recipes, and having a process to clean up and curate your lists will pay dividends. Plan, Build, Test, Execute, Learn, then start again.