Praising the One Percent, 1%, OccupyWallStreet in Wrong Place

George Riesman writing in the Mises Daily,
"In Praise of the Capitalist 1 Percent" 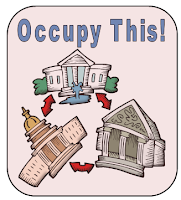 
"Capitalism — laissez-faire capitalism — is the ideal economic system. It is the embodiment of individual freedom and the pursuit of material self-interest. Its result is the progressive rise in the material well-being of all, manifested in lengthening life spans and ever-improving standards of living.

"The economic stagnation and decline, the problems of mass unemployment and growing poverty experienced in the United States in recent years, are the result of violations of individual freedom and the pursuit of material self-interest. The government has enmeshed the economic system in a growing web of paralyzing rules and regulations that prohibit the production of goods and services that people want, while compelling the production of goods and services they don't want, and making the production of virtually everything more and more expensive than it needs to be. For example, prohibitions on the production of atomic power, oil, coal, and natural gas, make the cost of energy higher and in the face of less energy available for use in production, require the performance of more human labor to produce any given quantity of goods. This results in fewer goods being available to remunerate the performance of any given quantity of labor.

"Uncontrolled government spending and its accompanying budget deficits and borrowing, along with the income, estate, and capital gains taxes, all levied on funds that otherwise would have been heavily saved and invested, drain capital from the economic system. They thus serve to prevent the increase in both the supply of goods and the demand for labor that more capital in the hands of business would have made possible. They have now gone far enough to have begun actually to reduce the supply of capital in the economic system in comparison with the past."

Bottom Line:
The 1% is the US Government. The protesters like the media spotlight of New York. Rather than OccupyWallStreet they really should be OccupyWashingtonDC where a few hundred people wield significantly more power.


Xolo
Yes, economics is hard. Being ignorant or stupid takes much less skill.
at 9:53 AM